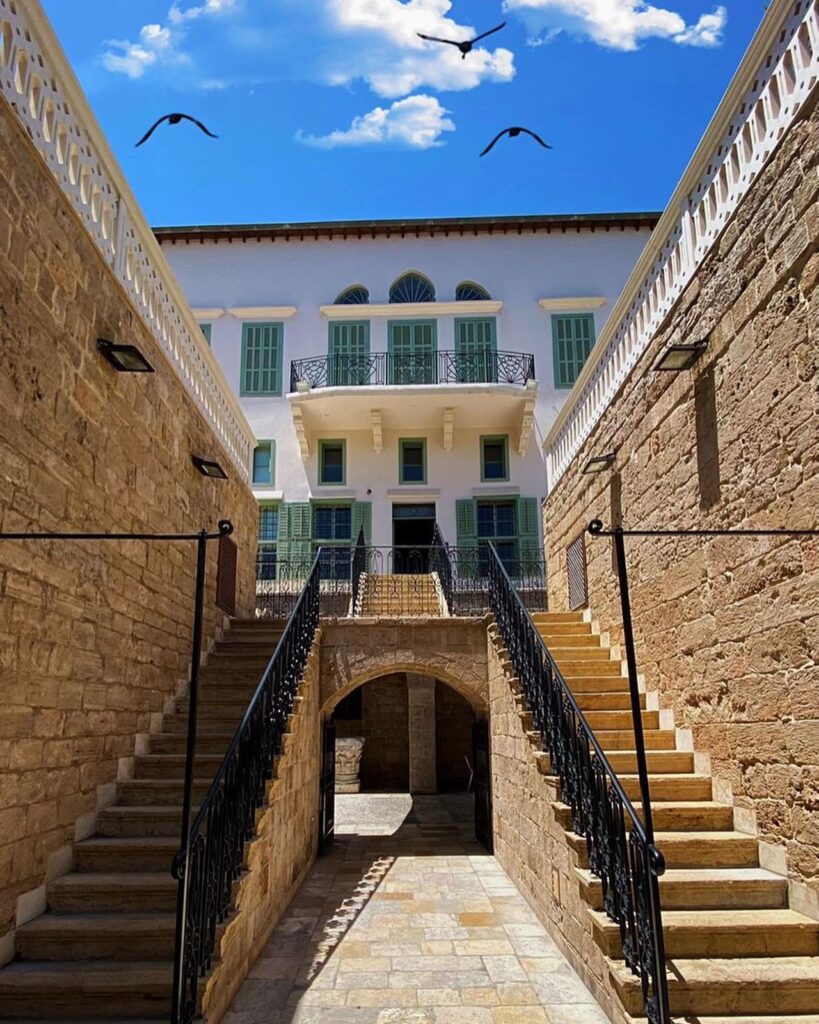 Soap making is a family business that is passed down from grandparents and fathers to grandchildren and children.

The Soap Museum in Sidon, or the so-called Audi Museum, is located in Haret Auda, near the Sidon Wilderness Castle in Old Sidon. In the past, the museum building was a soap factory consisting of a brick house. You enter the factory through an electric door that connects you to a wooden bridge that gives a quick panorama of what’s inside. You see the aesthetic elements of the museum through what is reflected in the good lighting and the ancient walls. Square shaped lamps are spread out to the right of the entrance. It also contains samples that were hung on the wall in glass containers containing the basic materials for soap making (oil, tar, perfume, ashnan al-qaliya, and laurel). A wooden staircase leads to the basement, where the stone jars bring the necessary mixture and boil it in a wood-fired stone oven. He wrote on the walls detailing how soap was discovered. What is distinctive is that the museum displays the history of soap making and its various stages of development, from the era of the Phoenicians to the era of the Ottoman Empire. The Odeh family bought the building in 1880, and kept it as a soap factory to meet the needs of the residents in Lebanon and of the distant baths, such as: Hammam al-Mir, Hammam al-Ward, Hammam al-Saba’ Banat, Hammam al-Sheikh and the new Hammam that were in the city at the time. The factory continued to produce until it stopped in 1975 when the civil war broke out, and in 1996 the building was restored, which turned into a museum in 2000. The director of the museum now is Carol Azar, whose main task in the museum is to preserve the history of soap making and craft using traditional methods in Lebanon. The museum attracts many Arab and foreign visitors, as well as Lebanese citizens. Where the visitor is explained about the benefits of soap and the method of manufacturing it from natural materials that do not harm the skin, but rather help in the treatment of skin diseases. Natural materials such as flowering water, honey, rose water, milk are added to it, in addition to other materials used in soap making. European tourism is in May, May, April, October and October, while Arab tourism is in July, August, and August. The beautiful thing is that most of the museum’s visitors are from the younger generations who love archeology and ancient explorations, motivated by a love of knowledge and knowledge. The city of Sidon is famous for the production and export of soap made from olive oil to Arab and European countries.

The museum has recently been restored, as it is made of old rock and yellow sandstone, in addition to the Hammoud family who built the soap factory today, before it was owned by the Lebanese Audi family, who later became famous for establishing the first bank in Lebanon, i.e. “Bank Audi”.

How was soap discovered?

The discovery of soap goes back to a woman who was cleaning her grease-stained pot with rum, and she obtained a substance that might be the basis of soap. There is also a large number of ancient texts attesting to the existence of soap through the ages. The soap industry has always been present in the region where the olive tree grows. The soap industry has developed in Syria, Lebanon and Palestine, thanks to the large and widespread cultivation of olive trees, as the olives that fall to the ground before they are ripe are not edible, so they are exploited and utilized in the soap industry in various forms. Different types and sizes.

All credit goes to the Arabs themselves, who contributed mainly to the development and modernization of this industry, which is inherited from generation to generation until this day. From these countries and from Sidon in particular, the process of exporting olives and olive oil continues until now.

We use cookies on our website to give you the most relevant experience by remembering your preferences and repeat visits. By clicking “Accept”, you consent to the use of ALL the cookies.
Cookie Settings Accept
Manage consent

This website uses cookies to improve your experience while you navigate through the website. Out of these, the cookies that are categorized as necessary are stored on your browser as they are essential for the working of basic functionalities of the website. We also use third-party cookies that help us analyze and understand how you use this website. These cookies will be stored in your browser only with your consent. You also have the option to opt-out of these cookies. But opting out of some of these cookies may affect your browsing experience.
Necessary Always Enabled
Necessary cookies are absolutely essential for the website to function properly. These cookies ensure basic functionalities and security features of the website, anonymously.
Functional
Functional cookies help to perform certain functionalities like sharing the content of the website on social media platforms, collect feedbacks, and other third-party features.
Performance
Performance cookies are used to understand and analyze the key performance indexes of the website which helps in delivering a better user experience for the visitors.
Analytics
Analytical cookies are used to understand how visitors interact with the website. These cookies help provide information on metrics the number of visitors, bounce rate, traffic source, etc.
Advertisement
Advertisement cookies are used to provide visitors with relevant ads and marketing campaigns. These cookies track visitors across websites and collect information to provide customized ads.
Others
Other uncategorized cookies are those that are being analyzed and have not been classified into a category as yet.
Save & Accept